Sawyer Vanden Heuvel, who has served as the Director of Communications of the South Dakota Synod for the past six years, will be stepping down from his position on August 18, 2022. Sawyer is a candidate for Word and Sacrament ministry in the ELCA and will be completing his pastoral internship at St. Mark’s Lutheran Church in Sioux Falls. This is Sawyer’s final requirement for his Master of Divinity degree at Luther Seminary in St. Paul, MN.

“August 18th will be a day filled with both joy and sorrow,” said Bishop Constanze Hagmaier. “Joy, because the ELCA will gain a superb intern and outstanding leader, sorrow, because I will miss this fabulous human and team member, who has helped me grow in my role as your Bishop and served the SD Synod beyond his job description. Well done, good and faithful servant. I am grateful to have been on a team with you in ministry.”

An open house will be held for Sawyer on August 18, 2022, from 3-5 PM at the synod office. All are welcome to attend to wish Sawyer well into his internship year.

The Rev. Dr. Aaron Matson has been called to serve as the next Director of Communications. Pastor Aaron Matson will begin in this position on September 1. Pastor Aaron will continue to serve as the companion synod coordinator in addition to his new duties with communications. Prior to serving on synod staff, Pastor Aaron has previously served congregations in Humboldt and Toronto, South Dakota. Pastor Aaron lives in Sioux Falls, SD, with his wife, The Rev. Chris Matson, and their dog Penny. He graduated from Trinity Lutheran Seminary in Columbus, Ohio, with his Master of Divinity in 2008 and received his Ph.D. in Political Science from the University of South Dakota in December of 2017.

“I would invite you to join me in welcoming Aaron to his expanded role on Synod staff. He will serve as the communication’s director as well as continue in the role of the companion synod coordinator,” said Bishop Hagmaier. “Personally I value Pastor Aaron’s thoughtful personality, his deep wisdom and insightful conversations. He will bring the gift of connecting scripture with our daily experiences as we live into our calling as God’s children who have been given a voice to speak about God’s kingdom and invite others to join in the dance of the Trinity. Welcome, Pastor Aaron, I give thanks for you and your willingness to serve on synod staff.”

About the South Dakota Synod:

About the Evangelical Lutheran Church in America:

The ELCA is one of the largest Christian denominations in the United States, with nearly 3.3 million members in more than 8,900 worshiping communities across the 50 states and in the Caribbean region. Known as the church of “God’s work. Our hands.,” the ELCA emphasizes the saving grace of God through faith in Jesus Christ, unity among Christians and service in the world. The ELCA’s roots are in the writings of the German church reformer Martin Luther.

SD Synod
Recent Posts
Who We Are 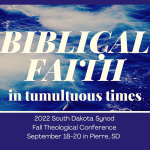 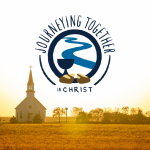